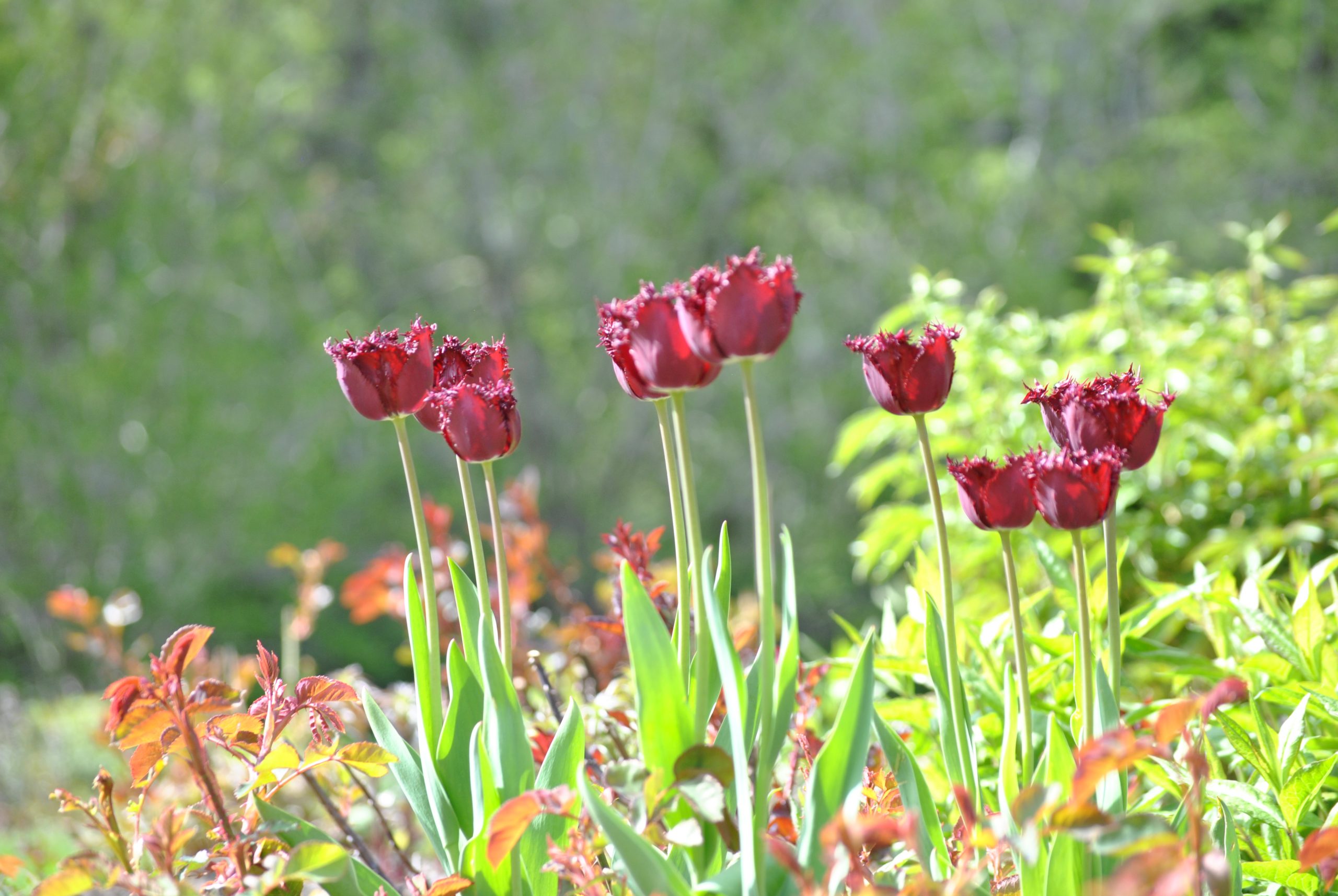 Elsie Reford began gardening on her Grand-Métis estate in 1926. For nearly all of the subsequent years, until her last summer in the gardens in 1958, she kept a garden diary. They have miraculously all survived. From May to October of every year, she recorded her work in the gardens. Sometimes the entries are short – but on most days they illustrate the work underway and notes about how to improve plantings or the layout of the gardens. A handful of the diaries are in elegantly bound books, the gift of a doting husband or generous friend. But most of them are rather dull-looking diaries, the gift to clients of her Montreal oil furnace company! Most of them are written in her very distinctive scrawl, sometimes in ink but just as often in pencil. During the 1940s, she took up doing her diaries on the typewriter, making transcription much easier.

Elsie Reford’s garden diaries are among the treasures of Les Amis des Jardins de Métis collection. Along with her garden photo albums and period colour slides, they have enabled the gardens to document Elsie Reford’s collections and restore her gardens. As part of her 150th anniversary, Judith Webster’s work to transcribe the diaries and complete a full inventory of Elsie’s plants will enable the ongoing work to restore her gardens for their 100th anniversary in 2026.

Judith Webster is a garden lover. She has built an extensive garden on her property in the Eastern Townships which she attends to actively. For several years she assisted her son Stuart Webster in running a garden shop Dig This in the Ogilvy’s store in Montreal where she shared her garden knowledge with her many clients. Stuart also runs a successful landscape and garden design firm that has built many award-winning gardens for clients in Montreal – and in Metis – where his firm designed the floral terrace around Estevan Lodge.

Judith was a frequent visitor of the Jardins de Metis before becoming involved as a volunteer. Not just any kind of volunteer, mind you. Her studies at the Inchbald School of Garden Design in London, England and general knowledge about gardening made her the perfect person to undertake the transcription of Elsie Reford’s garden diaries. She has the unique knowledge base to transcribe the difficult hand-writing of the elderly Elsie and to identify the different types of plants that Elsie is referencing on every page. Her plant knowledge she supplements with a reference book of garden plants, which she refers to as her “Bible,” the RHS (for Royal Horticultural Society) Index of Plant Names by Mark Griffiths, that lists both the Latin and common plant names.

During the construction of the Jardins de Metis, Elsie Reford kept a detailed record of everything that happened in her garden. Her thirty diaries contain descriptions of her daily work in the gardens over three decades, making them extremely valuable resources in reconstructing the history of the garden. In order to help make them more readable and accessible, Judith Webster has been hard at work transcribing them.

Transcribing these diaries is a meticulous and time-consuming process. Judith explained that one of the biggest challenges she faced at the beginning of this project was becoming used to Elsie’s flowery handwriting, shorthand and abbreviations and occasional errors in plant names. Elsie Reford was writing for herself, never imagining her diaries would be transcribed or even read by others. In order to decipher Elsie’s words, Judith either uses a magnifying glass or zooms in to the pages on her computer. She also has to check the common names used by Elsie with the names in use today – nearly a century later. While the Latin names of plants are mostly fixed, plant taxonomy (the naming of plants) is a bit more fluid and plants are sometimes re-classified or their names are changed as plant scientists work on the DNA of species and the horticultural industry develops new hybrids.

Despite these challenges, Judith is passionate about this project and described it as a “fascinating exploratory experience.” She works on this project daily, and stated “each day I can’t stay away from it.” On a personal level, Judith finds value in the work through everything she has learned about gardening from Elsie. Working with primary source documents has been particularly valuable: “the experience of seeing a garden through somebody else’s eyes is like looking at a painting… seeing someone’s vision come to fruition through her written words.”

This project is also highly important to reconstructing the history of the Jardins de Metis. As Judith explains, “Elsie is the star” of the gardens and in reading her diaries Judith believes she has gained uniquely valuable insight into the time that Elsie was alive. The Jardins de Metis were made in an era where you could import plants from all over the world, and Elsie was able to afford rare and exotic plants and had help to source and purchase them. What she was able to accomplish with these resources is remarkable: “She took each area, named them, and created these incredible gardens. She is an inspiration.”

Judith’s work underlines the knowledge that primary sources can carry and the value of making them accessible to all.

Daphne Moss, a fourth year Anthropology and History student at McGill University, is a summer intern at the Jardins de Métis. She was selected by the McGill Arts Internship Office in collaboration with the Jardins for the “You Can Make History” Internship in which she is working to promote the importance of making primary sources accessible to all.